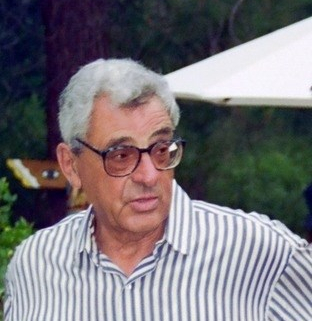 Robert Ronald, Job Forum founder, passed away, surrounded by family, on May 14, 2022, at the University Retirement Community in Davis, CA where he lived with his wife, Trish Ronald.

A fund honoring his legacy and to support the 70 years of The Job Forum has been created,

Please support the volunteers and the mission of The Job Forum as work continues to find people the work they seek, here in The SF Bay Area.

Robert Ronald was born Robert Rosenthal on March 14, 1926, in Berlin. His family fled Germany in 1933 and lived freely in Paris until September 1939, when France declared war on Germany. The French Government then placed his father, Kurt, and most other foreign men, in a series of French internment camps and barred Robert and his two sisters from attending school. On June 12, 1940, Robert, his sisters, and mother caught the last train out of Paris before it fell to the Germans. They spent the next fifteen months in Cassis-Sur-Mer, in the South of France. With the help of a relative in New York, and HIAS (the Hebrew Immigrant Aid Society, which today helps all people fleeing persecution), Robert’s mother obtained visas and in August 1941, the entire family, including Kurt, were very fortunate to leave and sail to Cuba.

Robert spent the rest of the war in Havana, going to school, working various jobs, and finally cutting diamonds to help support his family. On August 14, 1946, Robert and his family left Havana for New York City. Two years later he traveled to California and spent the 4th of July in Lake Tahoe. He loved both Tahoe and San Francisco so he decided to stay.

In the Bay Area

Robert worked in various sales jobs and then managed a flag manufacturing business. In 1952, he started his own flag business.

At the same time, Robert was also proud to have founded The Job Forum to help young people find work.

Support from The San Francisco Chamber of Commerce

The Job Forum has always been sponsored and supported, starting in 1952, and still today, by the SF Chamber of Commerce.  The Job Forum is celebrating its 70th Anniversary this year.

In 1954, Robert was drafted into the US Army where he worked as a clerk and attended the college level courses offered to soldiers. Through his language skills and general resourcefulness, he eventually got himself posted to the San Francisco Presidio and moved back into his boarding house on Jackson Street. He was honorably discharged in January 1956. That same month he enrolled at San Francisco State University where he met the love of his life, Patricia Fobes. In 1957, Robert graduated from San Francisco State (fulfilling a lifelong goal of obtaining a college degree), began a successful insurance career (excelling at sales because he always put his client’s interests first), and married Trish (“the single best thing I ever did in life”). The newlyweds purchased their house on Parrott Drive in San Mateo where they raised three children and lived happily for 63 years. Robert and Trish also build a cabin in South Lake Tahoe in 1959 where they enjoyed hosting family and friends over the next six decades. They moved to Davis in December 2021.

Robert cherished his family and his many close friends in San Francisco, San Mateo, Lake Tahoe, Cuba and in the insurance industry. He read extensively, especially historical non-fiction and political memoirs. He loved opera, Trish’s cooking, fine food and especially dessert. He enjoyed nothing more than sitting down to a meal with friends and new acquaintances and listening to their life stories. In his own memoir, Last Train to Freedom, Robert documented his story of escape from the Nazis and life in America.

Robert was as generous as he was punctual, never stinting of opinion and always picking up the check. Robert’s extraordinary life experience, intellect, humor, wisdom, and interest in others had an immediate and lasting impact on all who were fortunate enough to know him.

Robert is survived by his wife, Trish, and three children and their spouses, Peter (Jane Miller), Pam (Raoul Adamchak), and Rick (Anne Harper). Robert was also very proud of all of his grandchildren and admonished them often to “not take their privileges for granted”.

Pride in The Job Forum

Robert Ronald’s daughter, Pam Ronald, an accomplished plant geneticist and “ Distinguished Professor of Plant Pathology at UC Davis and a member of The National Academy, says that she recollects that her father was always very proud of The Job Forum. She mentions he was quite gratified that the volunteers have helped it endure for 70 years. This is impressive and it is valuable for the Bay Area community.  She says her family wants the volunteer work to help job hunters to continue and they have been proud to support and have donated to the new fund, for the future of The Job Forum, The Robert Ronald Job Forum Memorial Fund.

She says, “My father enjoyed his connection with The Job Forum and never could say enough about how important it is to support those who want to find work.”

He often said, “Nothing has changed really, a good life is supported by a good job, one you can feel proud doing.”  Pam will be making him proud by helping Janet Beach, Executive Director of The Job Forum to create and hold a “Plant Genome and Plant Microbiome Career event at The Job Forum in 2023 “for those adults and young people who want to consider careers in learning more and working in companies who want to find out more about how the microbes in plants can work together, increasing nutrients and water use and fighting off disease.”

We take comfort in the knowledge that Robert lived a full life, and that his philosophy and sprit will continue to inspire those who care about the value of work.

The Job Forum | All Rights Reserved – 2021 | Website Design by CalApps

How a Job Forum Intern Moved from High School to Confidently Finding His Own...
Scroll to top